By popular demand, a platform to show examples of cases where people who have followed his advice, both on and off the BHF forum, have lost the case, lost money or been slapped with a costs order. Please make reference only to known cases backed by suitable evidence, anything not backed up by evidence will have to be removed. If you need help uploading documents, please contact admin.

Examples of failures and lost cases documented on this site

Zeke, yet another alias for Jason Bennison Mr benison has just returned from hiding abroad. He had a 50k debt. in regards of unreturned charges to customers and Court costs from failed cases, he was a Bankrupt. He has no assets and no money and currently living with his mother. He is desperate for cash. […] 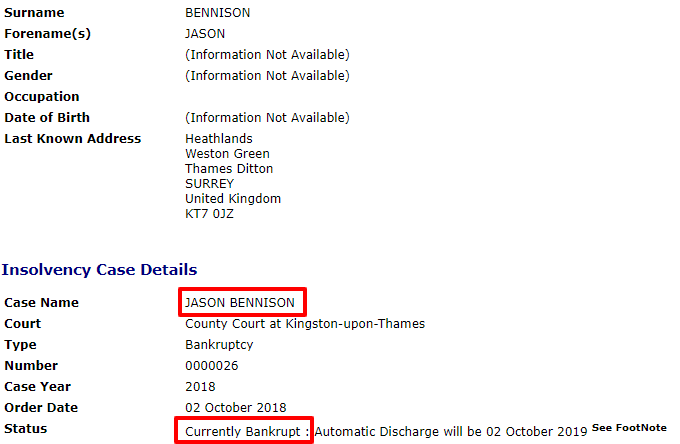 Late last night, Bennison was having one of his wild rants, where he said the following: Funny he should say this, over six months after a High Court Judge said the exact opposite. As we have seen with Nominet, Bennison refuses to accept a ruling against him and always wants another bite of the cherry. […]

Here we have a poster who, of their own admission, is not well acquainted with fora. They say they received one letter, presumably the notice of enforcement. The also say the have already paid the debt to the creditor, who is a firm of solicitors. Bennison tells them that solicitors don’t pass money to bailiffs! […]

Bennison has been involved in advice forum for the last 10 years, and BHF was set up over 5 years ago. Over those years, he’s had his share of trials and tribulations, but 2017 has most certainly been His Best Year Ever. Jason and BHF rebranded and reloaded for the New Year Could this endless string […]

Hot on the heels of the Miller court failure, we can’t end 2017 without another of Jason Bennison’s failures. This one is simply entitled ‘1st DECEMBER’. On the BHF (now Dealing with Bailiffs) forum a few days ago, the pathological liar; Jason Bennison seemed to indicate that this latest legal case had been a success. […]

On the 12th of  March 2015, a writ of control was issued against Mr Miller for £408,000. This related to a judgment from March 2010 for £330,000. I am assuming that the difference between both figures relates to interest on the debt. The Creditor passed the writ of control to a High Court enforcement company to enforce. Of […]

It all started with a debt under £200, the debtor in this case had a couple of PCNs totaling £172, which he failed to pay in time. The council sent this debt to Newlyn for enforcement, which resulted in the addition of a £75 compliance fee to the debt. We all know this fee is […]

A couple of weeks ago, a poster went to BHF for help with a TV license fine. The opening post said the following: It is quite obvious from the above that the poster was not only fully aware of the fine, she had even promised a weekly payment to the court. See below how she […]

By popular demand, a platform to show examples of cases where people who have followed his advice, both on and off the BHF forum, have lost the case, lost money or been slapped with a costs order. Please make reference only to known cases backed by suitable evidence, anything not backed up by evidence will […]

Here we have a thread where the debtor had a visit from DCBL with a writ in the name of a limited company. Although the poster started a thread on BHF, it looks like they had previously contacted Jason’s “helpline” directly, possibly via DWB. Jason was quick to say that the bailiff cannot attend the […]

The Crowning Glory has to be Bennison’s very own action against Nominet! You can see the whole sorry saga below:

A little background No doubt everyone will be familiar with Bennison’s saga against Nominet, which begun when he was desperate to find out the details of the owner of a certain domain, only to find that they were protected by a privacy service offered by hosting giant GoDaddy. This service was an optional extra offered […]

Having seen Bennison’s legal aspirations, it’s time to see whether they could ever be fulfilled. The snippets below speak for themselves. The Witness Statement His Witness Statement can be seen on this page: Bennison v Nominet. In that sea of confusion, a couple of points are worth a mention. Firstly, he’s got the addresses mixed […]

Well, well, well, what have we here… Mr Bennison opened a dispute over this domain with Nominet and he LOST! Nominet ruled that this site was NOT an abusive registration, nor did he show rights to a name or mark similar to this domain. Despite being marked as “optional”, the Nominet arbitrator went to town, […]

87 Comments on "A history of failures and lost cases"

Now that January had ended, its interesting to witness how much damage Mark Bowley’s vile and offensive comments have caused to the Bailiff Help Forum.

With over 100 comments (mainly from Mark Bowley) being made on the ‘Lying Again’ thread during January, it is not at all surprising that the number of new visitors seeking help has dropped like a stone.

High Court enquiries…NONE at all.

In response to the above post, Jason Bennison (writing as Schedule 12) said this:

Next, she will be counting my clients. Thankfully that is something she will NEVER know

In fact, Jason Bennison’s good friend and business colleague (Mark Bowley) has already publicly announced the dire state of his ‘helpline’ when he made this public post a few months ago:

I looked after Jason’s helpline when he went to Hong Kong earlier this year. I had 5 enquiries in a week.

Probably half of those were made up.

If it weren’t for the fact that Jason permits the site to be used as a platform for Marks abuse no one would bother commenting on the garbage.
‘

PLEASE NOTE: This post has been updated to reflect events that took place during the year.

On the BHF (now Dealing with Bailiffs) forum a few days ago, the pathological liar; Jason Bennison seemed to indicate that this latest legal case had been a success. Yet again folks, he was lying (no surprise there).

There was only one legal case on 1st December, and that was a Detailed Assessment application that was heard at Edmonton County Court.

Jason’s client was Mr JA and he was acting as a Litigant in Person.

His application was a complete shambles. He was complaining about fees that had not even been charged to him (including storage fees).

As provided by legislation, the enforcement companies solicitor was required to provided Mr JA with a copy of his costs schedule 24 hours before the hearing.

After receiving a copy of the cost schedule, the claimant emailed the court to advise that he had a tummy ache and would not be attending the hearing.

The court dismissed his application.

Clearly, another one of Jason’s satisfied customers.

There is a new post dedicated to this, thanks for your contribution: http://bailiffhelpforumarewrongagain.com/the-1st-of-december-hearing/

So you issue a claim and then don’t bother to attend court? Could it be because it was a spurious claim to start with? Our friend Schedule 12 is no stranger to spurious claims… Look at his legal history… Just don’t mention Nominet! Hahahahaha

It could be that I’m posting in the wrong place, but let’s give it a go.

There’s a lot gossip doing the rounds about another Jason Bennison failure, this one about the seizure of a couple of old planes. The owner tried to claim almost £3.5 million and lost. Seems that he tried to nick one of the planes back after it had been taken into control by the EA and got himself arrested.

At his trial, the gossip mill is saying that he got himself removed from the court after insisting that the Magistrates address him by his freeman on the land name of James of the family xxxxxx.

This subject deserves its own thread, maybe you’ll want to contact the site admins through the contact form with full details so one can be set up. Anything involving £3.5 million quid deserves a lot of attention, even more so if we have FMOTLs involved.

Once more i go away for a week & come back to find Jason heroically trying to save his arse & his teeny tiny empire by inventing more usernames & spouting the most self serving bullshit I’ve heard for a very long time!!!!

Sure Pote, whose Jason’s own private dick (heavy on the dick there) is also behind a few of those new users on the BHF aka Bullshit Hell Forum.

Seriously they both need to stop the arse crawling with each other as it’s getting very hard to tell where Jason ends & Pote begins! LOL

Maybe they are one and the same…